To celebrate the launch of my new sixth novel, Cold Inside, I will be offering the two novels from my vampire series – Blood:Lust – free for a limited time.

The books are Midnight Cocktail and Cheating Sunrise.

Both those books will be free for five days – Monday 4th December to Friday 8th December.

Grab ’em while they’re free, have a blast reading them, and do me a massive favour by leaving a review on Amazon.

Links to the books on Amazon.com and Amazon.co.uk are on their website pages which are linked above. Or click the cover images below to go to their pages on this site.

I haven’t posted anything to this blog for a couple of months because I’m concentrating on using most of my free time to write the second novel in the Blood:Lust series. Based on what I’ve written so far, I expect to have the book written by the end of October, edited and honed to something vaguely resembling a finished product by the end of the year, and published not long after that.

I’ll do a title reveal in a month or two, and a cover reveal whenever I have a cover sorted out. Talking of covers, I haven’t done anything about this one yet but I am hoping I can get the same artist who did Midnight Cocktail to do the sequel. He is a fast worker, so I’m not too bothered about getting the cover done yet.

Future plans, following this book’s publication, will include tidying up the third novel in the Kate Hayes series and publishing it. It’s already written, just not in a publishable state yet. There will be a fourth novel in that series, and I’ve already planned it out and written a couple of rough 10k word chapters.

That’s all for now. I have much better things to be writing than this.

I know, I know – I apologise to Bram Stoker for deliberately choosing May 26th for the Kindle release of Midnight Cocktail. It’s a tribute, okay, not plagiarism or the death of originality. Not that I’ve shied away from either of those too much, but you’re going to have to read the whole book to find out just how much. 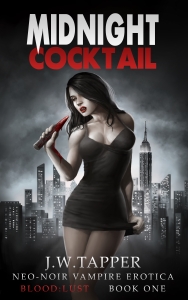 I’ll start with the cover, because that’s always a good place to start and, according to popular opinion, that’s usually as far as most people get if the cover doesn’t catch their attention. The original Midnight Cocktail cover (the predominantly white one) was mostly done by me, with a lot of helpful suggestions from a couple of friends, plus an excellent New York skyline image by Michael Tompsett, for which I am still very grateful.

However, despite how much I like that cover, it didn’t suit the book. It’s just a bit too ambiguous – it could be a crime story, a thriller, murder mystery, but not really a Neo-Noir Vampire novel. I had a couple of honest, critical and decidedly unambiguous comments from people who have a lot more experience of this kind of thing than I do. To summarise – “It’s ok but a bit boring.” and “It looks more like a crime thriller or horror novel, and it’s likely going to confuse buyers”. I’m extremely thankful to them, because not only were they right, but they were generous enough to tell me the truth.

On a recommendation, I contacted Nikolai Ostertag, a freelance artist specialising in fantasy art. The cover that you now see, and that will hopefully be updated on Amazon very soon – it’s not an instantaneous process – is the work of Nikolai and I am very happy with it. I don’t describe Lana V (Midnight Cocktail protagonist) in the book [which may or may not be a spoiler, depending on your expectations] but Nikolai was able to capture pretty much exactly how I imagined she would look after we had exchanged a few emails. I’m obviously not going to tell you how I described Lana to Nikolai, because that would definitely spoil something!

Midnight Cocktail is not a huge book, coming in at just under 60,000 words, which is at the low end for a full novel. That has a lot to do with the fact that it has been edited with a hefty chainsaw and written to a strict and tight agenda: action, entertainment and zero flab.

Amazon links for Midnight Cocktail are below. If your territory is not .com or .co.uk, search for this ASIN on Amazon: B00WYR85FY

If you write a book blog or you contribute to a review site, please contact me for a review copy of Midnight Cocktail. See the contact page for how to do that.

This is what I had on the list of essential components for a Neo-Noir Vampire novel. Midnight Cocktail has all this and plenty more. It even has an ending.

Oh yes, and love and romance. There’s a lot of that.

It was going to be ebook only, then I decided to go with Kindle only (at least for the first 3 months) so that I could try out Kindle Unlimited, but I was really keen to see a paperback version, so there’s one coming. Very soon. And it will look like this…

Pretty cool, right? At least I hope that’s what you’re thinking. As soon as I have the links for the paperback, I’ll add them to the Midnight Cocktail book page.

Here’s the cover of the first book in my forthcoming Neo-Noir vampire series. The title is Midnight Cocktail, which you probably already spotted. Click on the cover image to see the full size hi-res image. Click THIS LINK to go to the book’s page on this site.