Crucified Barbara – In The Red

Driving the car, training in the gym, writing a chapter or two of my latest Vampire Erotica novella… this is my current album of choice to listen to while doing pretty much anything, and easily my favourite album from 2014.

Opening with blistering, thrashy rage aimed at any dissenters who might still be missing the point, “I Sell My Kids for Rock’N’Roll” is Crucified Barbara’s raised middle finger to anyone who dares to compliment them for being ‘good for being a girl’ or mistakenly assumes that they don’t have time to write songs because they’re busy painting their nails. Taken literally, it’s a laudable backlash, but there’s a subtle layer of irony in the lyrics that works perfectly with Mia’s consistently striking  vocal delivery. A great opener and a solid, rocking track with an edge of relevant humour. Also, the video completely kicks ass.

“To Kill a Man” tackles a tough subject  from a hypothetical revenge perspective, questioning what it would be like to kill a man. It’s a dark, serious track and it arguably doesn’t seem appropriate to be enjoying the song just as a song, although it is damn catchy and has some rock solid bass and drums going on behind Mia’s raw soloing and intimidating vocals.

“Electric Sky” almost feels like it’s going to be a filler track, but there just aren’t any of those on this album, and it soon asserts itself as a powerful, melodic mini-anthem.

“The Ghost Inside” has appropriately haunting vocals and a grungy yet ethereal musical backdrop. Not a particularly standout track for this album but it’s really just preparing the listener for the absolutely classic track coming up next.

“Don’t Call On Me” is my favourite track from In The Red, definitely in my top 3 CB tracks from any album. Swapping between soaring high notes over a moderate tempo, and flat-out hard rock riffing, it is a virtually flawless track that perfectly showcases the band, not wasting a single second of its 4 minute run time.

The title track crashes in with down ‘n’ dirty guitar and pounding drums, clearly asserting that there’s no intention to ease back on the power or the pace. It’s worth noting that there isn’t a ballad on this album, nothing that comes anywhere near the restraint and fragility of  “Count Me In” (from The Midnight Chase), and that is significant because the message here is obvious: Crucified Barbara don’t need to include ballads when their hard rocking tracks are so varied and of such consistently high quality. 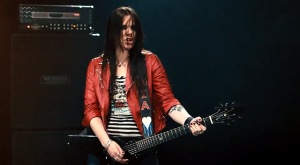 “Lunatic #1”. I’m completely guessing, but I reckon this is a song from one bandmate to another. If I’m wrong, that’s fine, because I doubt I’m the only person who interprets lyrics from their own perspective and likes them just that little bit more for doing so. Another cracking track to add to the list.

“Shadows” delivers yet more riff driven foot-tapping goodness, with sweet distorted guitars and a frenetic solo, unleashing the kind of dusty floorboards roadhouse rock that is never going to quit.

“Finders Keepers”. I’ll admit it took a few listens before I started to like this track. The prominent use of the cliché ‘finders keepers, losers weepers’ initially grated, but the catchy rhythm and deceptively dark attitude (‘you will die alone’) won me over in the end. Now it’s another one I really look forward to hearing every time I play this album.

“Do You Want Me”. In a word, ‘yes’. Another unconventional love song, another reason to love this band. Mia pins up a list of reasons why you shouldn’t want her, then hits you with the question as if the choice was ever yours to make. It’s like Pat Benatar with balls, although that conjures up a pretty bizarre image.

“Follow the stream”. Before I listened to this track for the first time, I saw the title and thought ‘Ballad’. It isn’t. The last track on any album needs to serve one specific purpose – it has to make you want to immediately replay the whole album from the start. Guess what, that’s exactly what “Follow The Stream” does. Every time.

Congratulations to the band for winning the P3 Guld category Rock/Metal of the Year 2014 for this album. I can’t wait to see how they top In The Red, although I’m sure they will.